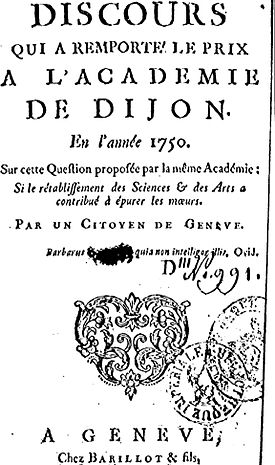 Discourse on the Arts and Sciences

A Discourse on the Moral Effects of the Arts and Sciences (1750), also known as Discourse on the Sciences and Arts (French: Discours sur les sciences et les arts) and commonly referred to as The First Discourse, is an essay by Genevan philosopher Jean-Jacques Rousseau which argued that the arts and sciences corrupt human morality. It was Rousseau's first successful published philosophical work, and it was the first expression of his influential views about nature vs. society, to which he would de...